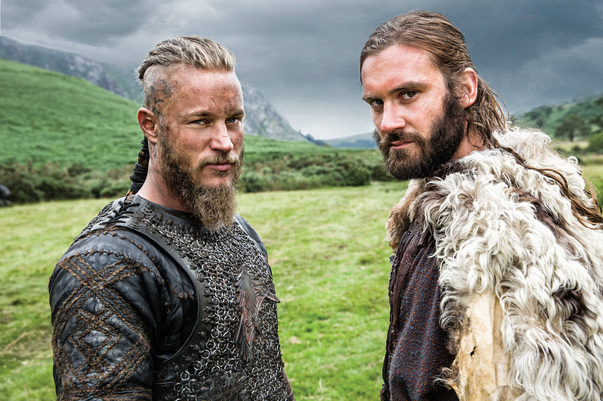 Details are as follows:

“On the Set with VIKINGS”: Thursday, July 24 – Saturday, July 26. Location: 450 2nd Avenue
Cast Autograph Signing on Friday, July 25 from 1 – 2 p.m. at 450 2nd Avenue
Fans will get a behind-the-scenes look at VIKINGS and have a starring role in their own custom video that can be shared on social media. From the moment fans enter the “back-lot” they will be treated as cast members. Upon entering, guests will create a character profile and choose a weapon of choice. Next, they will meet with hair and make-up artists to become transformed into a fierce Viking and be placed into three scenes complete with Vikings ships, battles, axes and villages. When fans have completed the experience they will have a :30 video to share via Twitter, Facebook or Vine.


VIKINGS Comic Book – Creator & Story by Michael Hirst, Written by Joe Brusha & Ralph Tedesco, Artwork by Giuliano Piccinnino with Cover Art by Anthony Spray
Custom, limited edition VIKINGS comic book will be given to select fans who visit the “On the Set” activation on 450 2nd Avenue. In this exclusive comic book for SDCC, the character Floki entertains the Vikings with a humorous tale of Thor, Loki and other gods.

VIKINGS tells the extraordinary tales of the lives and epic adventures of these warriors. The drama portrays the world of these Dark Age raiders, traders, explorers – not from an outsider’s view, but, through the eyes of Viking society. VIKINGS centers on Ragnar (Travis Fimmel), a restless young warrior and family man who longs to find and conquer new lands across the sea and claim the spoils as his own.

Travis Fimmel (Warcraft) continues to lead the stellar cast as Ragnar, along with Katheryn Winnick as Lagertha, an Earl and fierce shield maiden; Clive Standen as Rollo, Ragnar’s impulsive brother; Alexander Ludwig as Bjorn, the intelligent and bold warrior son of Ragnar; George Blagden as Athelstan, a young and not-so-innocent monk;Jessalyn Gilsig as Siggy, beautiful wife of the late Earl Haraldson; Linus Roache as Ecbert, King of Wessex, a man of strength, knowledge and undisguised ambition; Gustaf Skarsgard as Floki, a ship builder who designs the new generation of Vikings ships and Alyssa Sutherland as Princess Aslaug, Ragnar’s new wife.

Joining the cast for season three are Lothaire Bluteau (The Tudors) as Emperor Charles of France, a powerful man who views battling the Vikings as spiritual and earthly; Kevin Durand (The Strain) as The Wanderer, a mysterious man who is not what he seems; and Morgane Polanski (The Ghost) as Princess Gisla, the elegant, self-possessed daughter of Emperor Charles and his most trusted advisor and Ben Robson (Dracula: The Dark Prince) as Kalf, Lagertha’s trusted second in command

VIKINGS is created and written by Michael Hirst – one of the premier historical story-tellers in the industry (Academy-Award winning film Elizabeth; and the Emmy and Golden Globe nominated series The Tudors).

HISTORY® has picked up a 10-episode third season of VIKINGS. Season three is currently in production in Ireland and is slated to return in 2015.


About HISTORY®
HISTORY®, now reaching more than 98 million homes, is the leading destination for award-winning original series and specials that connect viewers with history in an informative, immersive and entertaining manner across all platforms. The network’s all-original programming slate, including scripted event programming, features a roster of hit series including American Pickers®, American Restoration™, Ax Men™, Counting Cars™, Pawn Stars®, Swamp People® and The Legend of Shelby the Swamp Man as well as HISTORY®’s first scripted series Vikings, and epic miniseries and special programming such as The Bible and the Emmy® Award-winning Hatfields & McCoys, Men Who Built America, Gettysburg, Vietnam in HD, America The Story of Us®  and 102 Minutes That Changed America. The HISTORY® website is the leading online resource for all things history, and in 2011, the United States Library of Congress selected HISTORY®’s Civil War 150 site for inclusion in the historic collection of Internet materials related to the American Civil War sesquicentennial.  www.history.com.

Please join in the conversation by using hashtag #VikingsSDCC.