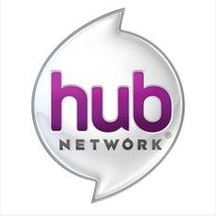 (Hub Network Press Release) LOS ANGELES — Hub Network, a destination for kids and their families, returns to Comic-Con International: San Diego with the ultimate fan experience that includes an online sweepstakes for viewers to win a trip to this year’s four-day event, a voting booth opportunity for fans to express why they love their favorite pony from Hasbro Studios’ popular animated series “My Little Pony Friendship is Magic,” and a live rock concert featuring the cast from the Daytime Emmy® Award-nominated “The Aquabats! Super Show!”

“The Hub’s Win a Trip to Comic-Con Sweepstakes” will award one lucky winner a trip for two to the 2013 San Diego Comic-Con International conference.  Beginning Saturday, June 1 through Sunday, June 9, viewers can go to http://www.hubworld.com/comic to enter to win a Grand Prize that includes:

The winner will be randomly selected from all entries. Entrants can get more details and the official rules at www.hubworld.com/comic.

Additionally, Hub Network plans to create a cross-platform event at their Comic-Con International booth (#4118), allowing fans to express why they love their favorite pony from Hasbro Studios’ popular animated series “My Little Pony Friendship is Magic.” “Hub Network’s My Little Pony Fan Favorite Poll” asks fans to elect their “fan favorite” pony from the “mane six” (Twilight Sparkle, Fluttershy, Pinkie Pie, Rarity, Rainbow Dash, and Applejack). In addition to voting, fans have the opportunity to go into a video booth to record a testimonial that could end up on Hubworld.com or on national TV during the “Hub Network’s My Little Pony Fan Favorite Poll” winner marathon on Sunday, September 1 (10:00 a.m. - noon ET).

Immediately following Comic-Con, on Monday, July 22, Hubworld.com will open up voting to the rest of America at Hubworld.com/vote4ponies, where fans can vote once a day and play online games to earn up to ten more votes daily.

Finally, for the third year in a row, the cast from “The Aquabats! Super Show!” returns to Comic-Con International in San Diego ready for battle with a concert designed to recap their first two seasons of rockin’ crime-fighting adventures and to showcase their extraordinarily unique musical talents at the House of Blues on Thursday, July 18 at 8 p.m. PT (Doors open at 7 p.m.). Blending live-action comedic sketches with animation segments and awesome music, the concert promises to be a ridiculously fun event for kids of all ages. Tickets can be purchased in advance starting June 21 directly through the House of Blues at: http://www.houseofblues.com/venues/clubvenues/sandiego/

To find the channel in your area, please visit http://www.hubworld.com and check the channel locator at the top of the page.