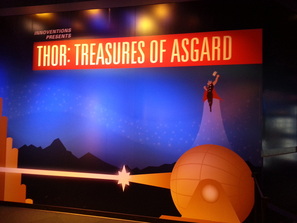 On November 1st the Thor: Treasures of Asgard The Bifrost exhibit opened at Disneyland's Innoventions.

From the Disneyland Innoventions Atrractions Page:
Thor: Treasures of Asgard
The Bifrost has opened between Earth and Asgard—and you’re invited to come explore a world of gods. Embark on a journey across this “cosmic bridge” connecting Innoventions at Disneyland park with the home world of Thor, the Mighty Avenger—and star of the film Thor: The Dark World. 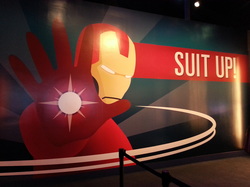 The Iron Man exhibit is still available in the Innoventions attraction in Disneyland even though it was scheduled to leave at the end of the summer 2013.

From the Disneyland Innoventions Atrractions Page:
Iron Man in Tomorrowland
Experience the latest Iron Man technology at the new exhibit, "Iron Man Tech Presented by Stark Industries." Get a rare, up-close look at the sophisticated Iron Man suits of armor as you’re invited to walk through an exact replica of Tony Stark's Hall of Armor guided by JARVIS, who provides an explanation of the full range of the armor capabilities. During your tour: