June 7, 2013- Like many of my paranormal pals, I'm happy to have Paranormal Witness return on Syfy.  I spoke with Paranormal Witness Executive Producer, Mark Lewis as he shared some of the details of what is forthcoming this season. Read the first part of the interview below.

Christiane Elin of Red Glean: Season 3 of Paranormal Witness was back last night for the premiere.

Mark Lewis: Yes, quite literally in this case. Did you enjoy it?

Red Glean: It was awesome. It didn’t disappoint at all not like any of them have but it lived up to the last two seasons.

Mark Lewis: Fantastic, I’m really delighted. This is a bigger season for us this time to twenty films.

Mark Lewis: This is the most we’ve done. But we’ve really got an extraordinary line-up this season.  From hauntings, packs of werewolves, UFOs, demons, some real crime stories, and all sorts of things. I think this season should hopefully raise the bar even higher than seasons 1 and 2.

Red Glean: Will Syfy be running all 20 episodes in a row?

Mark Lewis: There may be some break but check with Syfy.

Red Glean: I dabble in the paranormal probably more than dabble. I have a huge group of friends and following that do the same. I texted one of my friends to ask if he had any questions for the Executive Producer of Paranormal Witness and his reply back to me was no because he is doing everything right.

Mark Lewis: That’s good to know. I mean there are definitely things that have sort of changed and I think got better from one season to the next. We obviously try to keep the production value of the dramatization high as we can possibly can. I think you know in terms of everything, the way that our crew works and the kind of directors that we are attracting now. I think we really are raising the bar and really hopefully getting any high production value of the look of the film. But the one thing that has, just continues to improve, I think is the quality of the stories. I think that the more and more the Paranormal Witness is known the more we are able to access the stories, more incredible stories and think you know people are trusting us now and coming forward to give us their stories and tell us their stories. Which means that we kind of have a broader range of stories. I think perhaps more intimate stories, more emotional stories because I think people feel confident that they can sort of unburden themselves I suppose. The second film, that is coming up, the one called “The Lost Boy” which I defy anyone to not be in tears at the end. It is a literally haunting story of an absolutely lovely couple, Edwin and Lillian Gonzalez who unfortunately could never have children. They end up moving into a house that, in reality, looks like something out of the Addam’s Family. They end up as I always see it almost being haunted by a child that they never had. There is a story to who who that child is, to the lost boy of the title is. You find that out at the end. I’m not going to spoil it for you know but safe to say I think by far it’s the most emotional story that we have ever done. You realize when you make films like this I did the interviews for that story in this particular case, you realize you have a tremendous responsibility to the contributors to the people who interview for this film. When we go meet these people initially we are interested in their stories but you get to know these people very very well. And as I say they do unburden themselves. In this case, I think, Lillian and Edwin really did get into their most haunting secrets of their lives and it really comes across in the show. It’s a really an extraordinary, sort of, emotional tale. You realize that people who are witnesses to the paranormal nothing offsets the responsibility because you realize that these things can deeply, deeply, and tragically affect people. So when they tell you their stories, on partly some people are motivated because it’s a cathartic experience for them to try to tell their tale. Some people actually think well if this happened to me and I can explain what it’s like to other people and maybe helping other people. That’s definitely the case with this story. We realized we had a tremendous responsibility with Lillian and Edwin because this paranormal story absolutely kind of shook them to the core. I think when people watch this film they really will feel as I did doing it. It was really the first time I really cried during an interview. It was extraordinary. This wonderful woman, Lillian, telling a story that completely had broken her heart. It’s a fantastic story. An amazing and heart wrenching story to watch. 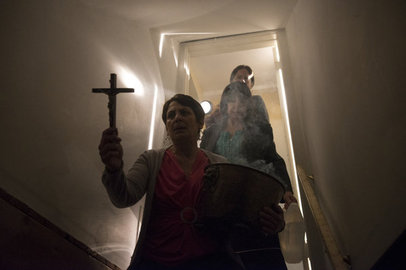 Red Glean: I’m looking forward to seeing it. A lot of the show is the storytelling. Speaking with the witnesses, how are you able to pull a coherent story because of how dramatic and terrifying the stories are that the witnesses lived through ?

Mark Lewis: The story telling aspect of it is incredibly important and I think that we pride ourselves in telling a good story and telling a good ghost story. You do have to communicate to an audience and you do have to keep things you know you have to tell the story in a way that is impactful, compelling, and powerful. We want to be able to wow people with our stories but the truth of the matter is the stories when we get them they are already impactful. They are already extraordinary. It’s just ,I think telling them in a way that is easy to understand and relatable. There is a real challenge to that. I think you’ll find with many of our stories what we are having to do is leave things out. Many of the witnesses that we interviewed, some of these hauntings had gone on for an extraordinarily long time and all manner of things happened. Actually quite often, we interviewed these people for sometimes for a whole day, hours and hours and hours trying to get the very best that we possibly can. Inevitably that means we have to actually leave out a lot of incidents, paranormal incidents that happen to people because it just too much, too much to  realize. We try to give the sense to our audience that these people have lived through a rollercoaster ride of paranormal incidence that comes across the film but we only 45 minutes to tell that story. Nine times out of ten there’s way, way more that we can’t possibly include in the time we have to tell the tale. But we have to keep things on point. For example “The Lost Boy” story, it is an incredible story but in fact there is other incidents we had to leave out and there are other hauntings that happened in that same house. We concentrate on one particular ghost usually the ghost that the witnesses have been able to some way indentify. Find historical information to substantiate who the ghost may be, who is or who, or what is responsible for the haunting. But often these houses they are sort of hauntings on top of hauntings on top of hauntings. There is more than one entity inside the house. For storytelling purposes, we have to simplify that down, we have to concentrate on one story otherwise it just becomes too complicated. You are absolutely right, there’s a massive challenge in storytelling. Hopefully, hopefully, fingers crossed, we are getting that right because they are really powerful stories. That’s what we are attracted to. We are attracted to really compelling narratives where the witnesses are able to hopefully really credibly, articulate a single powerful story that will wow you from beginning to end. 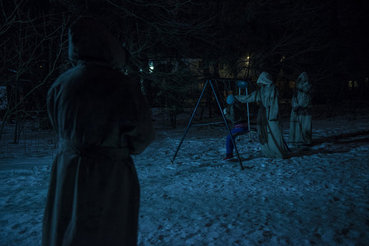 Red Glean: Do you, personally, have a scariest story that you have heard so far? This question comes via twitter.

Mark Lewis: For me, from this season?

Red Glean: It doesn’t have to be this season. They said their scariest story was the Dybbuk's Box.

Mark Lewis: I work as an exective producer on this series. You think that you are going to become immune because I sort of know all the secrets of the stories in advance and I know what’s going to happen in the end. I know when the scares and the jumps are going to come. I’m in the edit suites all of the time watching these shows being put together you think that your eye might come immune. I have to tell you sometimes I watch a rough cut of a film and I still literally jump out of my seat. It really does happen. But for me the most frightening stories from Season 2, without a doubt, will be “Man in the Attic” and “Fox Hollow Farm.” I think from this season “Long Island Terror” that went out last night, really is frightening. There’s another one, another demonic film that is coming that is called, “Deliver Us from Evil” which has really got under my skin. I find myself lying in bed at night with that particular theme that exists just hard to shake in some way. That’s another one of my favorites. (To be continued) More to come...