A New Paranormal Show with an Ethnic Twist, 'From Beyond' Premieres Tonight, Sunday, July 31
Written by: Christiane Elin 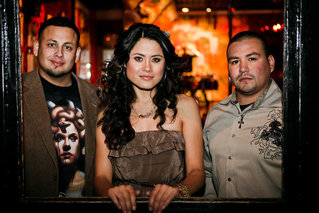 On July 31st, 'From Beyond', the newest spin on paranormal reality programming premieres on mun2. The three person team is lead by one of the youngest most accredited psychic mediums, A.J. Barrera.  He is flanked by a paranormal investigator, Ramiro Ramirez and investigator, Christian Vera.  (Pictured: The From Beyond Team, Ramiro Ramirez, Christian Vera and A.J. Barrera (L-R).Photo Credit: mun2)

They focus their investigations on Latino communities in Los Angeles. The Latino bilingual spin to the typical paranormal formula show separates them from the herd.

A.J. Barrera, uses his psychic medium-ship to sense spirit energy, communicate with the dead and connect the living with loved ones that have passed. A.J. goes in blind and is has no prior case information. He helps clients understand the spirit communications they are receiving.

New investigator, Christian Vera, works much like a case manager with her journalism background by interviewing the affected clients and gathering facts. Her interest in the paranormal stems from many paranormal stories and legends told to her by her family members. She’s the self-described skeptic of the team. Christian is more apt to bring logic and questioning into her investigating style.

The first case takes the 'From Beyond' team into the Martin family home where the team looks for what the family calls the ‘Shadow Man’ The show follows the paranormal show format of meeting the client, finding out the claims of activity, setting up what they call the “plan of attack” and beginning their investigation.

The intense music laid over the investigation can be distracting. Ramiro seems to take more of a leadership role while A.J. and Christian quietly stand back with the clients. There seems to be some over dramatization infused into the investigation to enhance the situation. Quite typical of other paranormal programming. The conclusion of the show spends an unusual amount of time on how the team is feeling and the genuinely frightened clients seem to be somewhat of an afterthought.

A.J.’s gifts aren’t utilized much in this first episode. Ramiro’s provoking investigating style is intense. Christian has the journalist/investigator role down but seems to be used as not much more than the trigger object. Her lack of experience in the paranormal field makes it difficult and frustrating with so few women in leadership roles in paranormal television. The environmentally unfriendly shots of them in three separate cars planning the meet-up for the next case could have been done with one car. Viewers would still understand Ford is the sponsor on the show.

From Beyond follows the same formula as the rest of the paranormal shows with an ethnic twist.  We'll see if that's enough to separate them from the crowd.  This is only the first episode so there is plenty more episodes to see in their 13 episode run.

When meeting the 'From Beyond' Team at San Diego Comic-Con, over a press gathering, the team is enthusiastic and genuine.

Tune into the newest paranormal show where paranormal needs no translation 'From Beyond' premieres on tonight, Sunday, July 31 at 10pm ET/PT on mun2. You can check out the first episode here: http://www.mun2.tv/shows/from-beyond/from-beyond-full-episode-shadow-man-episode-1