The 2015 San Diego Comic Con is upon us, check out all the amazing things that the BBC AMERICA booth will be selling and the first to market product and exclusives just for Comic Con! 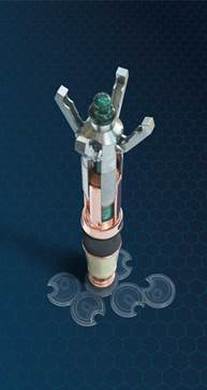 New York – June 29, 2015 – BBC Worldwide North America announced today that Doctor Who fans can soon own an extending Sonic Screwdriver universal remote control from The Wand Company, modelled after the Twelfth Doctor’s beloved gadget. The highly detailed and completely re-engineered working replica of Peter Capaldi’s iconic device will make its exclusive debut at San Diego Comic-Con on July 8, 2015 at the BBC AMERICA shop (booth #4129), before being released by selected retailers later in the summer. Individually laser numbered, the Sonic Screwdrivers sold at Comic-Con will each come with a signed certificate of authenticity, making them an ideal purchase for any collector. The limited edition numbered remote controls will only be available at the BBC AMERICA booth while supplies last.

The new Sonic Screwdriver has not only been updated to reflect the subtle changes in the Doctor’s coolest gadget, but now extends with a satisfying flick, just like the real thing, and includes a grip-mounted button, press-to-buzz action, and the Wand Company’s powerful Any-TV-Off functionality. The speech-teach feature makes learning the gestures and programming the Sonic Screwdriver easy, and the intuitive gestures allow the user to make like the Doctor and quickly take control of their home entertainment equipment – iPod docks, TVs, DVD and Blu-ray players, in fact, pretty much anything that is controlled by an infrared remote control. The 1:1 scale Sonic Screwdriver can store up to 39 remote control commands, is equipped with 12 authentic Sonic Screwdriver sound effects and a customizable personal lock code, and has 12 secret Morse code phrases from the Twelfth Doctor to decipher. Die cast in hand-polished, copper-plated metal, with a new stand that allows the Sonic Screwdriver to be displayed vertically, this device is not only a serious prop that will delight collectors, but with its host of authentic sonic sounds, it is also a cosplayer’s dream come true.

“The keen-eyed Whovian will notice subtle differences between the Sonic Screwdriver favored by the Eleventh Doctor and the one currently used by the Twelfth Doctor. We listened to fans’ requests and have evolved the design to match what’s onscreen, including the fun flick-to-extend feature,” said Chris Barnardo, co-founder of The Wand Company.

Making their market debut at San Diego Comic-Con alongside the Twelfth Doctor Sonic Screwdriver Universal Remote Control are snazzy Dalek striped socks and “I am the Doctor” socks depicting the Twelfth Doctor. These items will be available in the BBC AMERICA booth before anywhere else.

Sherlock limited release merchandise includes two t-shirts, a hoodie, a mini-standees pack from Advanced Graphics featuring Sherlock, Watson, and Moriarty figures, and a Sherlock vinyl figure from Titan; and for your resident Clone Club member, BBC AMERICA shop will be featuring a limited release Orphan Black t-shirt. A full list of merchandise is available below.
About BBC Worldwide North America:

BBC Worldwide North America is the main commercial arm and wholly-owned subsidiary of the British Broadcasting Corporation (BBC) operating in the U.S. and Canada.  The company exists to maximize the value of the BBC’s assets for the benefit of the UK license payer and invests in public service programming in return for rights. The company operates four businesses in the territory - linear and digital content sales and co-productions, consumer products, BBC.com, and BBC Worldwide Productions, the production arm responsible for the smash hit Dancing with the Stars. The company also owns a 50.1% share in cable channel BBC AMERICA through a joint venture with AMC Networks.