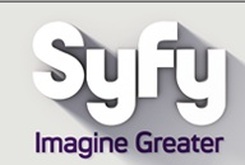 In making the announcement, Mark Stern, President, Original Content for Syfy and Co-head, Original Content for Universal Cable Productions, said: “Each of these series takes a known and successful formula and turns it on its head. Whether it is eclectic gold miners in the midst of paranormal activity, paranormal enthusiasts self-documenting the most haunted locations in America, or investigators researching and examining history’s most notorious criminals and legends in the world’s most haunted locations, these shows celebrate imagination while further strengthening Syfy’s successful reality brand.”

GHOST MINE - Premieres Wednesday, January 16 at 10PM
Forgotten in the remote woods of Oregon is one of the richest gold mines in the United States that was abandoned 80 years ago when a series of tragedies gave it an infamous reputation for being haunted. Now, a new owner has decided to take on the notorious legend and reopen the mine, assembling a colorful team of miners – both seasoned and new – to battle the elements in hopes of finding their fortune and teaming them with a pair of experienced paranormal investigators.
In each of the six hour-long episodes, this strong-willed and historically superstitious group of miners will face the day-to-day challenges of mining, aided by the paranormal investigators who unravel the mysteries surrounding the mine, including historic Masonic connections and a spirit who has been known to haunt the area for generations.

STRANDED - Premieres Wednesday, February 27 at 10PM
Ping Pong Productions (Destination Truth, Finding Bigfoot) joins forces with Josh Gates (star of Syfy’s travel-adventure series Destination Truth) and Jason Blum’s Blumhouse (Paranormal Activity, The River) to create Stranded, an all-new six-episode reality series that documents an unconventional – and terrifying – paranormal and psychological experiment. Each hour-long episode features the self-recorded footage of a diverse group of every-day paranormal enthusiasts - from newlyweds and a brother-in-law to a trio of roommates. Each team of three will be stranded at one of the most haunted locations in America and record the entire experience with hand-held cameras.
The footage from the subjects’ cameras will be supplemented by strategically-placed security cameras at each location, creating a suspenseful, completely unscripted first-hand account of each group’s stay. Over the course of the confinement, the subjects contend with increasingly pervasive feelings of fear and desolation, resulting in an experiment that represents a unique combination of psychology and the paranormal.

Stranded is executive-produced by Brad Kuhlman, Casey Brumels and Josh Gates (who also serves as showrunner) for Ping Pong Productions and Jason Blum for Blumhouse (the production company behind the Paranormal Activity feature film franchise and movies like Insidious and Sinister). Gerard Bocaccio who heads up Blumhouse TV will be a consultant on the project.

NOTORIOUS HAUNTINGS (Working Title) – Premieres Spring 2013
Produced by Pilgrim Studios – the company behind Syfy’s Ghost Hunters, the most successful paranormal franchise on cable – Notorious Hauntings features a group of researchers who investigate reports of extreme and dangerous supernatural activity across the globe. In each of the six self-contained episodes, viewers will follow the investigators as they not only research the otherworldly activity at each site, but also explore the gruesome history of the infamous and heinous individuals, their crimes and victims, to determine if they are the cause of the present-day haunting. Through the gathering of evidence and the uncovering of little-known history, Notorious Hauntings will explore some of the world’s most enduring mysteries, including the case of Jack the Ripper in London and the legendary Dracula in Romania and Slovakia.

Syfy is a media destination for imagination-based entertainment. With year round acclaimed original series, events, blockbuster movies, classic science fiction and fantasy programming, a dynamic Web site ( www.Syfy.com), and a portfolio of adjacent business (Syfy Ventures), Syfy is a passport to limitless possibilities. Originally launched in 1992 as SCI FI Channel, and currently in more than 98 million homes, Syfy is a network of NBCUniversal, one of the world's leading media and entertainment companies. (Syfy. Imagine greater.)